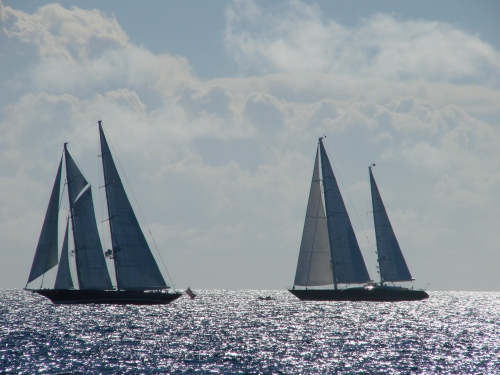 What It's All About: Two Yachts Head For The Finish Line at the 2010 St. Barth's Bucket

Day 2 of the 2010 St. Barth’s Bucket was another perfect day for yacht racing. The breeze was higher than forecast, which allowed for a slightly longer course then we had on Friday. Although many of the entries would have preferred a bit more pressure, there was still enough (10-14 knots) to get us all rolling along quite nicely.

One of the neat things about Bucket racing is the communication between the vessels. Using VHF channel 17, safety tacticians talk to each other about crossing situations and maintaining the 40-meter separation zone, thus ensuring that these huge boats never come in contact with one another. For the most part the conversations between the boats are polite and professional, but there are the occasional testy exchanges, which, if you’re not involved in, can be quite entertaining. “You don’t really believe you can tack across our bow, do you?” Of course, for this all to work, boats have to listen and respond to radio hails, which has been a problem for at least one of the yachts racing. We won’t mention the offending boat’s name today, but should the problem  happen for a third straight day, all bets are off.

We had a bit of a shocker on Georgia, which are reflected in the results. The first issue happened straight off the bat, when we were unable to set our spinnaker during the first leg (downwind start). After a heroic effort by our bow team, we finally gave up and did as best we could with our headsail, but lost more than a few places as we lumbered along. Good gains were made as we wove our way around the “Not So Wiggly” course until our next spinnaker set, which was technically perfect except for the fact that the brain trust on the flybridge (myself included) called for a reaching spinnaker. As it turned out, the running kite would have been the better call.

The final leg was a wonderful beat which saw us in lockstep just behind Baracuda, a 164-foot-long Perini Navi. Although it looked for a while as if we might be able to pass to weather, we ran out of race course before that could happen.

The forecast for the final day of racing is much lighter, which we’ve all been dreading. Sailing most of these boats in under 10 knots of breeze is an exercise in patience, but, hey. We’re in St. Barth’s, the sun is shining, the air is warm, and there’s plenty of refreshing beverages to be enjoyed after the day is over.