As you can see from the photograph above, it takes quite a few strong hands to douse the kite on a 159-foot sloop-rigged yacht. Our entire crew did an outstanding job on the final day of the St. Barth’s Bucket, and as a result, we placed seventh out of 39 entries. Not bad.

The last day of the event was forecast to be lighter than the two previous days, so the Race Committee sent us on a shorter course, only 15.9 miles. It was the second downwind start of the event, and our helmsman, Andy Beadsworth, nailed it, calling for a kite hoist well before we hit the line so we arrived with pace. To counteract the issues we had with the spinnaker socks the day before, the bow team decided to simply wool the spinnaker and take it down as you would on a much smaller boat; without a sock. This required no small amount of skill, and the team handled both sets and douses with style. 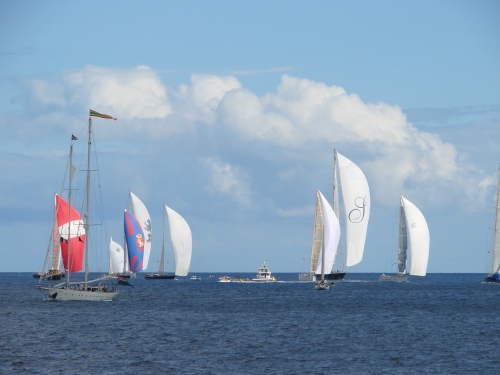 We crossed the finish line in seventh place, with a huge part of the fleet behind us. Above, a gaggle of megas head for the finish.

This was one of the most fun regattas I’ve ever attended for a few reasons. The sheer size of the fleet and the boats in it was a factor, as was the challenge of navigating such a large boat while also acting in the role of safety tactician. The bonhomie among the crews ashore was also great, and the owner’s joy at doing so well was quite rewarding.

Hank Halsted and Tim Laughridge, who run the event, put together a great event, with many highly skilled and committed people contributing to the effort. Peter Craig of Premiere Racing, Jim Teeters of US Sailing, Billy Burke, and a crowd of Newporters, all came down and did a wonderful job. I’m pretty sure that they also had a pretty good time off the water as well.

If you ever get a chance to do a Bucket Regatta, or even watch one from a smaller boat, do so. It’s a treat.