It’s Been Far Too Long

It’s been a long time (April 18th, to be exact) since I last updated the blog, and for that, I apologize. Moving, changing and acquiring jobs, and working long hours all summer long have interfered with my blogging duties. I realize that it’s important to keep a blog interesting, and this one hasn’t been for a while, except for those who’ve recently discovered it and have wandered through the archives, aka my musty digital cabinets full of curiosities.

I was hired in July to work for Rhode Island Fast Ferry, an outfit that runs two high-speed catamarans out to Martha’s Vineyard and back from May through early October. One of their boats, the Millennium, is a four-engined jet boat built around 11 years ago. Due to the fact that it uses water jets instead of propellers, it’s incredibly maneuverable and quick, but it gulps down a huge amount of fuel. As a result, the owner of RI Fast Ferry commissioned a new boat, the Ava Pearl, which was put into service in early July. Built by Gladding Hearn shipyard in Somerset, Mass., the Ava Pearl is a very different boat, as it has two engines rather than four, and is a prop boat. It isn’t quite as maneuverable, but it’s every bit as quick and uses far less fuel. 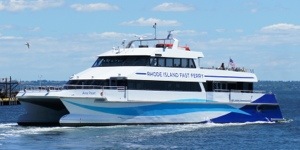 Both ferries require two licensed captains on the bridge, due to the fact that they run at an average speed of 30 knots in all conditions. One is the captain, or master, the other is a mate. I was hired as a mate and was immediately thrown into the fray. After training for a few days I was lucky enough to be assigned to make the first revenue, or passenger-carrying run, out to the Vineyard. Since then I’ve logged over 8,000 miles between our home port in Quonset Point, RI, and the Vineyard. I have learned the boat from top to bottom, and have taken great delight in every aspect of this job.

The view from the stern of the Millennium, at speed.

All of the captain’s jobs I had until now have been in the yachting industry, and, at my age, and with the experiences I’ve had as a yacht crew and captain, I far prefer the commercial side. To put it bluntly, there’s a lot less bullshit and ass-kissing involved, and I get to go home every night. Sure, I’ve put in a lot of 15-hour days, and I still have a lot of interaction with passengers, but it’s a lot less like slavery and a lot more like a real-world job.

One of the many perks of the job; beautiful sunsets.

On top of that, I take great delight in driving a large (relatively speaking) vessel, loaded with passengers, at 30 knots. It couldn’t be more different than driving yachts around. The boat takes two minutes to cover a mile, and the landmarks between RI and the Vineyard just fly by. The 51-mile trip takes around one hour and 40 minutes, compared to the 6 to 8 hours in a yacht going around 8 knots. 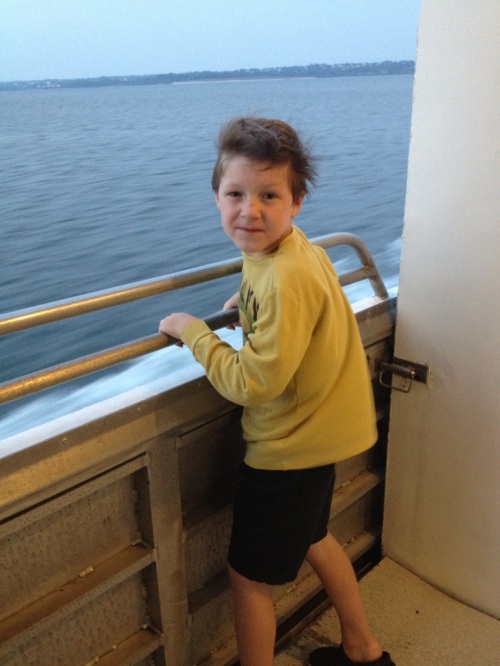 My son, Emerson, enjoying the speed rush of a fast ferry.