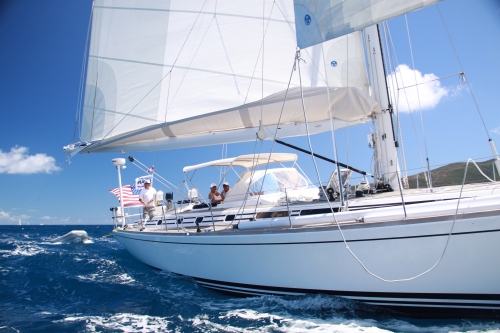 Glisse at the BVI Swan Rendezvous, 2011

It’s the end of Day 27 down here in the Caribbean. The mighty Glisse has been tied up to the dock here at Village Cay, Road Town for a few days now, and that’s about enough. The first time I was in Road Town was in 1968, and while I’d like to say it’s changed for the better since then, it hasn’t. Hot, smelly, crowded, and with very few amenities, Road Town remains the iconic Caribbean s***hole.

I’m going to move the boat to Nanny Cay after the BVI Spring Series clears out a week from now. Nanny Cay isn’t the center of the universe for sure, but at least there’s a beach to swim at, a decent grocery store, and a cool breeze, none of which is happening here  in Road Town. Don’t get me wrong, I’d still rather be here than sitting jobless in Newport in March. But as far as the BVI is concerned, there are better places to be.

The other choice was to be on the dock in the lagoon in Sint Maarten, which has its advantages and disadvantages. All-in-all, I guess I’d rather be in the BVI, where I stand a better chance of not getting mugged and killed. I like SXM, but it feels like it’s really starting to spiral out of control. Yacht Club Port de Plaisance has good security, but at some point, in order to preserve your sanity, you need to venture outside of the compound, and that’s where the trouble lies.

Nanny Cay, and Tortola in general, is far less cosmopolitan than SXM, but it feels safer, and the pace is slower. Granted, if I had any major boat projects to be done I’d be in SXM in a heartbeat, as I consider it the place to get stuff done down here.

Another month and a few days down here, and then back to my favorite place on the planet, Narragansett Bay. The brotherhood will join me down here late in the first week of May and we’ll do one of my favorite trips; Caribbean to New England in the late Spring. Hot as hell northbound to a  temperate clime. Good stuff.