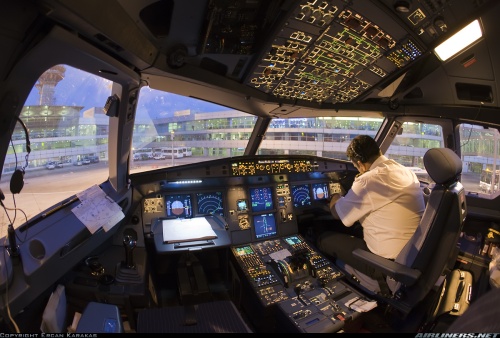 The cockpit of an Airbus 321, courtesy of airliners.net

On the second flight the front of the aircraft was run by a 23-year veteran flight attendant, Tom, who was kind enough to sit and chat with me for most of the flight. Tom has seen the best and the worst of the airline industry as an attendant, but is also licensed as a commercial pilot himself. Interesting to note that he makes more money as a veteran flight attendant than as a new pilot or first officer would make, which is a sad commentary on the deterioration of the industry as a whole.

After learning that I was an aviation freak Tom offered me a tour of the cockpit, which I thoroughly enjoyed. The first officer was kind enough to answer my questions and talk about what it’s like to fly the A321 (interesting to note that he preferred flying Boeing aircraft). For more on the Airbus design ethos, I refer you to William Langewiesche’s excellent book, Fly by Wire: The Geese, the Glide, the Miracle on the Hudson. To sum up, I’ll quote the USAirways first officer, who describes Airbus aircraft as “designed for Third-World pilots;” in other words, really hard to crash, although they still seem to accomplish that with alarming regularity.

All-in-all Thanksgiving was an excellent day of travel, although the TSA failed to provide me with any grist for my anti-TSA ranting. Everyone, including the fine folks of the TSA, was terrific; Customs and Immigration in Lauderdale was a breeze, the staff at all three airports was terrific, and the aircraft crew on all three flights were fantastic. Many thanks, especially, to the flight crew on USAirways Flight 1854, CLT-PVD, on Thanksgiving Day.