In Panama, Safe and Sound 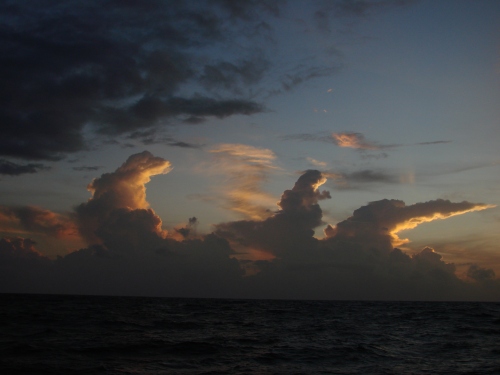 We’re tucked in nicely at the Shelter Bay Marina on the Caribbean side of the Panama Canal after arriving here at around 10:30 this morning. The weather is warm, but cloudy and rainy, but that’s OK, it’s nice to be on land.

This guy nearly ran us over, until someone arrived on the bridge and changed course.

We’ve seen an awful lot of traffic, especially large ships, but also a fair amount of small vessels, including fishing vessels with no lights. Exciting.

Donkey is having a relaxing trip. Although he doesn’t stand watches, he does provide us with a great deal of good conversation.

An example of one of he many squalls we’ve seen in the Western Caribbean.

We’ll be staying in this marina for the day tomorrow, relaxing and staying out of trouble. We won’t be going to Colon, because we don’t want to get killed. We may do a little touristing, but may save that for the Pacific side of the Canal, which, according to the guys we spoke to at the bar (reliable sources, we’re sure) is more expensive, but far safer.

OK, that’s it for now. I’ll be far more erudite tomorrow, after I’ve regrouped a bit, and gotten some sleep. Last night was a trifle trying, and it’s been a long day today.

“Why aren’t the Interwebs working out here?”

3 responses to “In Panama, Safe and Sound”