An Interesting Career Ends With A Bang

Originally commissioned as the USS General Harry Taylor and used as a troop transport, the 523-foot USNS Hoyt S. Vandenberg was rebuilt as a missile range instrumentation ship. Today, it was sunk as an artificial reef of Florida.

Built in an incredible 7 months during the vast expansion of American power during WWII, the USS General Harry Taylor had a relatively brief career as a troop transport in the waning days of the War. In 1946 she was struck from the Navy Register and served as an Army transport before being reacquired by the Navy in 1950. In 1958 the ship was retired again, only to be taken into US Air Force service in 1961 and converted into a missile tracking ship. It was taken under the Navy’s wing again in 1963, and served until 1983, again as a missile tracking ship. “Equipped with extremely accurate and discriminating radar and telemetry equipment,” its instruments tracked and analyzed “re-entry bodies in the terminal phase of ballistic missile test flights,” carrying out those missile and spacecraft tracking duties in both Atlantic and Pacific waters until its retirement in 1983.

In April, 2009, the Vandenberg was towed to Key West after being stripped of all toxins and hazardous material in preparation for its last assignment; becoming a dive and fishing attraction in the waters off Key West. It was successfully sunk today. 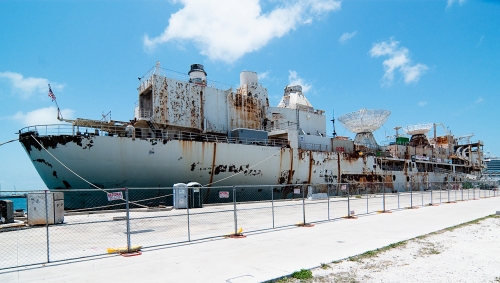 Looking its age, the Vandenburg sits in Key West waiting for its final voyage.

The Vandenberg being towed away from Key West. 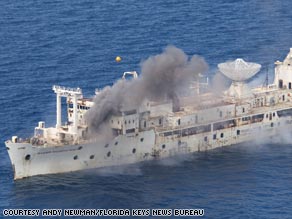 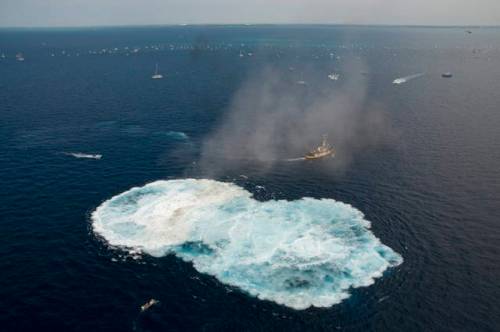 On its way down to the ocean floor, 140 feet below. It sank in minutes.