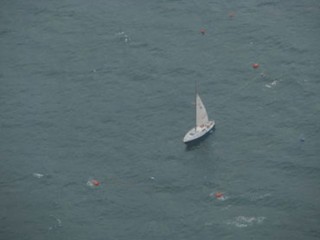 Most of us who navigate the waters off Newport are aware of the large area of the south coast of Aquidneck Island that’s a designated fish trap area. Large buoys, steel cables, and huge nets sit in those waters for a majority of the sailing season and it’s wise to stay far, far away from them. The fish trap area is clearly marked on charts, but at least once a year someone fails to heed the warning and gets tangled up in the nets. This year’s catch of the day happened relatively early in the season, but it was a doozy. Two men and a 16-year-old boy had to be rescued by a Coast Guard helicopter out of Air Station Cape Cod in nasty conditions on May 14th after being entangled in the nets.